Although Uganda has a comprehensive legal and policy framework to address violence against women and children, there are noticeable gaps in the implementation and enforcement. Violence against Women and children (VAW/C) remains high with more than 22% above 15 being sexually violated, and 51% physically assaulted. Sadly, we see these statistics come to life with the children that are brought to Grace Villa.

While investing in girls is growing, there remains a wide gap between what is promised and what is actually achieved. Key to the success of our programs is establishing effective referral links to other OVC service providers to ensure that our children and our extended families have access to basic needs for survival including protection, food, shelter and health care.

We document and disseminate our approaches that have been successful, and our best practices, and lessons learned along the way.

Through the year, Grace Villa has continued to mobilize and support community-based responses which identify and protect OVC’s in addition to providing both immediate and long term therapeutic care and nurture. 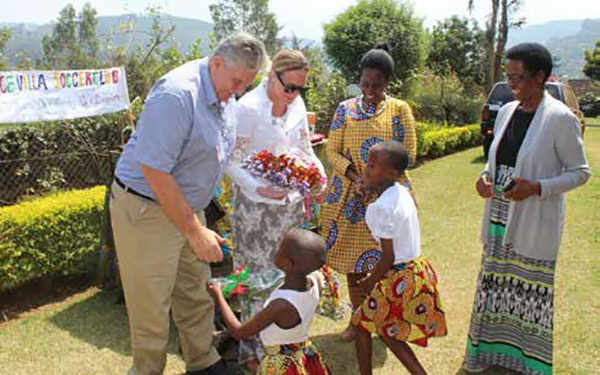 We find ourselves advocating for the community as well. Here are a few incidences.

The older brother of one of our Grace Villa children Doreen was a truck mechanic. One evening as he was working under a truck, it fell on him and injured his spinal cord. He needed emergency transportation to Mulago Hospital in Kampala, which was the only facility that could help. Every minute that passed mattered, as his spinal cord had to be decompressed as soon as possible.

The hospital would not transport him without transportation money for the ambulance. The family had given up, then Doreen called Ruth at 11pm and sobbed the story to her. Grace Villa intervened. They announced to us that even if we paid for fuel, it was night time so there was no staff present to drive him, and no doctor on duty to escort him so it was a helpless case. We called the Minister of Health. He called the Hospital Superitendent, who ordered that an ambulance be prepared to immediately transport the young man. He received surgery a few hours later, was in a wheel chair for a while, and is now progressing to using a walking stick. Most importantly, his life was saved.

Faith, one of our external Grace Villa children, lives with her sick, very old grandmother because her mother married a man who would not let her bring a child who wasn’t his into their new home. One afternoon while Faith was playing soccer in our field, children from the community came running in through the gate saying her mother was laying in the road not too far from our home, in a pool of blood.

Her husband had come home drunk the night before. She was cooking and asked him if he had remembered to bring salt. He beat her severely, and when she was fell to the ground he jumped on her stomach, causing her spleen to erupt. We intervened both on the medical side, facilitating an operation, and legally in trying to get the police to intervene. This was a slow process, with us having to push and then facilitate multiple police visits to the hospital.

Even the hospital counselor asked for facilitation to follow up on the case, which he said would eventually go to court. Sadly, Faiths mother died a few days later from post-surgery complications. The step-father showed up at the funeral and was applauded. We went to the police station every day, and each time we had to buy the paper on which to write the report, and pay a taxi to transport the police officer to the various scenes. At one point, a large group of Faiths step fathers friends and relatives stormed the Grace Villa compound to demand that we stop involving the police. We remained relentless, until he was finally arrested.

Too often, reports of abuse fall on complacent ears even at police stations. They demand facilitation fees which these children and their guardians cannot afford. Some police are corrupt, and accept bribes from the accused. Conversations with police reveal that some of them actually do not know what procedure to follow. Last year, we received an email from a young teacher in New York, who wished to volunteer at Grace Villa. She asked if she could bring her father along. Her father turned out to be New York State Judge and Surrogate of Sullivan County Courthouse of Monticello, New York: Honorable Frank J. LaBuda. In light of what we had been going through in regards to child sex offenses, were thrilled!

To best benefit from this unique resource within our small town, we asked, and he accepted to spend most of the day meeting with and sharing the wealth of wisdom and experience he gathered over the last four decades in judicial and legal service.. 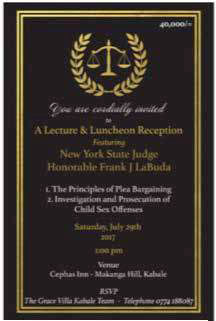 The event, held at Cephas Inn Kabale, was well attended and well received by the community with an attendance of over 200. Hosted by Kabale District High Court Judge Hon Moses Kawumi Kazibwe. State Attorneys and other members of our legal fraternity, law enforcement, probation officers, Community Development officers and other stakeholders, the press, teachers and clergy were all in attendance

We Rise by Lifting Others